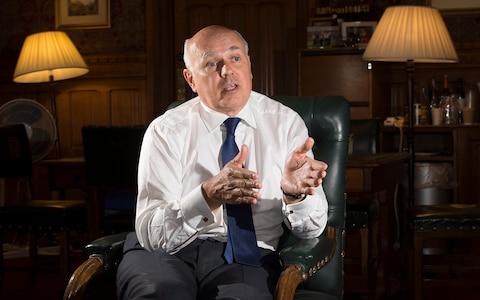 Boris Johnson’s favoured scheme for trade after Brexit could cost businesses up to £20bn a year through extra customs declarations, HM Revenue and Customs has warned.

The ‘maximum facilitation’ system, or max fac, seeks to avoid border delays by using new technology and by pre-approving big exporters through a trusted trader scheme.

By making customs declarations away from the border the system seeks to reduce disruption and travel times.

But those declarations are themselves an expensive administrative task for businesses.

“There were almost 200 million intra-EU consignments in 2016. [Each declaration is estimated to cost] between £20 and £55. For ministers we have settled on £32.50 per customs declaration, so 200 million at £32.50, that is £6.5bn,” said HMRC’s chief executive Jon Thompson, in a hearing with the Treasury Select Committee.

As EU companies have to make declarations too “double that, it takes you to £13bn. Then there is the question of EU requirements on rules of origin – ‘is this cheese from Cheddar?’ It is difficult to estimate, but reasonable to think it is several billion pounds more.”

In total he estimates the annual cost would be between £17bn and £20bn per year.

By contrast the ‘new customs partnership’ (NCP) proposal, favoured by other ministers, would see the UK collecting tariffs on goods bound for EU markets, with businesses claiming rebates later.

This would mean fewer customs declarations and less administrative expense. HMRC estimates those costs as up to £3.4bn per year.

At a glance | ‘Maximum facilitation’

“It delivers the free flow of goods without customs declarations, it avoids those costs of the highly streamlined [max fac] model,” Mr Thompson said.

The cost to HMRC of implementing max fac would be around £250m per year, largely in its work processing the extra customs declarations.

NCP would cost less at £180m, after setup costs of £700m. Mr Thompson said the focus in that system would be keeping costs as low as possible so businesses would find it worthwhile to reclaim the tariffs.

Mr Thompson added that HMRC currently has 1,100 staff working on Brexit projects, including working out the practicalities of these two potential post-Brexit systems and the ‘no deal’ option.

HMRC has re-prioritised its resources to cope with this, slowing down work on 39 other projects.

Nicky Morgan, the chair of the Treasury Committee, summed up the evidence describing the end result as “a functioning but sub-optimal border at the end of January 2021” which “will take between three to five years [to set up] depending on which of the options [is chosen] but that cannot even start until a political decision is made.”

Mrs Morgan, who was a prominent figure in the Remain campaign, suggested it would be easier “if Parliament voted for a customs union” to avoid either of the options being debated by the cabinet.

Business group the British Chambers of Commerce said the cost is “shocking”.

“One of the reasons why the figure is so shocking is that this is the first time the Government’s customs proposals are being discussed in terms of real impacts on businesses. It was always a logical consequence that not being in a customs union would mean completing, and paying for declarations – and whilst it is not something that will give businesses cause for celebration, they at the very least need to know that there are costs and processes they should anticipate,” said Anastassia Beliakova, the BCC’s head of trade policy.

“Many firms will need to make new arrangements or, at worst, absorb new costs, and there has been no real guidance to date about what they need to plan for. The sooner we have clarity about the future customs relationship with the EU, the sooner we can start having a real discussion about its practical consequences.”

Mr Thompson’s figures received short shrift from Number 10. The Prime Minister’s official spokesman said the £20 billion cost was “not a figure that I’m aware of”.

He said: “The Prime Minister has asked for work to be done on both customs models. That work is ongoing and therefore any speculation about implementation is just that.”

He said: “It does not make any sense, it is literally a set of assumptions that have no basis in reality. That is the truth. I don’t where the hell they got this £20bn from – it is an absurd figure to nominate as a cost.

“This looks like a deliberate attempt to push people towards the customs partnership. It’s is nonsense, HMRC has not done the work on this.

“There are very few exports will require rules of origin costs as only the big supply chains need that.

“This is an absurd over estimate which only goes to show that little or no work has been done on the customs issue by HMRC. It is as though they stuck a finger in the air.”