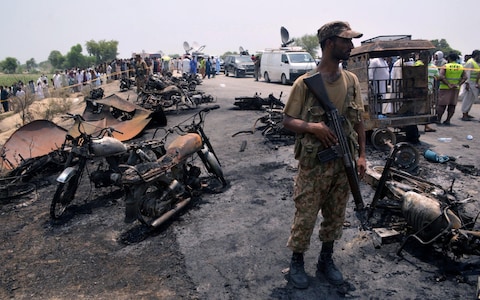 The boss of Royal Dutch Shell has suffered a bruising shareholder revolt after more than a quarter of its investors voted against his multi-million euro payout for last year.

But shareholders took against the FTSE 100 boss after an accident in Pakistan last year claimed the lives of more than 200 people in an explosion of a fuel tanker operated by one of the energy giant’s subsidiaries.

The tragedy provoked the ire of one of the City’s most powerful proxy advisers, which urged shareholders to vote against Mr Van Beurden’s pay ahead of the AGM in the Hague today.

Institutional Shareholder Services (ISS) criticised Shell’s scrutiny of the accident and said Mr Van Beurden was paid 80pc of his maximum bonus despite achieving only near-target levels on its operational excellence and sustainable development goals, which make up 70pc of the overall bonus scorecard.

A soldier stands guard amid burnt out cars and motorcycles at the scene of an oil tanker explosion in Bahawalpur, Pakistan in June 2017

“Neither the annual report nor the sustainability report detail any of the factors which led to the accident, and the remuneration report is silent on it altogether,” a report from ISS said.

Shell responded to the criticism by pointing out that its executive pay was in line with policies supported by shareholders and approved by ISS at last year’s annual meeting.

But shareholders paid heed to the criticism by cutting support for his pay packet from 92pc last year to just below 75pc in the non-binding vote, despite only a modest 3.7pc pay increase compared to 2016.

The AGM was also dominated by criticism of Shell’s green credentials by activist shareholders who are calling on the oil major to broaden its carbon-cutting plans to include the emissions of its customers when using Shell fuels.

However, only 5.1pc of shareholders backed the resolution for tougher targets. The level of support is lower than in 2017 when 6.3pc voted in favour of a climate protection resolution.