Global markets slipped further on Friday as a shock drop in US private sector activity rattled investors. These were the day’s main events:

Wrap-up: Markets down at close

That’s a wrap – here’s how Europe’s blue-chips ended the day.

Overall, a pretty volatile session, although it never really looked like we were set for a happy ending. The pan-European Stoxx 600 has made a loss across this week, slipping 0.63pc.

Thanks for following along today – we’ll be back on Monday for what is set to be a mega week of reporting. Join us then…

Looking at next week’s corporate reporting calendar like… pic.twitter.com/gTabTzZyjC

Let’s end the week on a happy note. Or not. The human race could cease to exist without massive worldwide action to tackle global warming, economists at JP Morgan have warned in a hard-hitting report on the “catastrophic” potential of climate change.

In an alarming document sent to clients, they said that deaths, immigration and conflicts will soar as the planet heats and water supplies dry up. Famines will increase and species will be wiped out.

All this will have a devastating impact on economic growth and the stock market, the report’s authors David Mackie and Jessica Murray said.

The impact of climate change has been massively underestimated, they said, adding: “Something will have to change at some point if the human race is going to survive.” 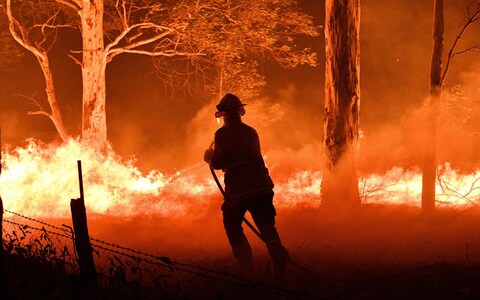 JP Morgan experts have said a catastrophe could lie ahead

It might feel a long time ago now, but here’s a reminder from my colleague Tom Rees about how surprisingly decent this morning’s European PMI data turned out to be:

Factories neared a return to growth after an unexpected acceleration in the purchasing managers’ index for February.

The composite PMI rose for a third consecutive month, climbing to a score of 51.6 from 51.3, according to IHS Markit. Any score above 50 indicates growth.

However, there were early signs of disruption from the coronavirus outbreak amid predictions of a significant hit to the Chinese economy.

‘Concerning’ PMI, but too soon for the R-word

Capital Economics’ Michael Pearce says that the US PMI reading will “inevitably raise fears about the underlying health of the economy”, but added:

While we certainly wouldn’t rule out economic growth slowing further in the first quarter, weighed down by the crisis at Boeing and supply chain and tourism disruption from the coronavirus, we have a hard time believing the apparent message from the Markit PMI that the economy is on the brink of a recession.

He highlighted the services-sector drop as the most concerning element, but said elements of it point to an abundance of nervousness of the looming election, and the coronavirus outbreak. Mr Pearce added:

The headline services PMI is based on just one survey question on business activity. Other, more tangible, details from the survey held up much better, with the employment index falling more modestly, to 50.7 from 51.8. Unless job creation and consumer confidence suddenly craters, its difficult to see how the new downside risks that have emerged in recent months would be enough to sink the entire economy. Reaction: New orders fall for first time in a decade

With the exception of the government-shutdown of 2013, US business activity contracted for the first time since the global financial crisis in February. Weakness was primarily seen in the service sector, where the first drop in activity for four years was reported, but manufacturing production also ground almost to a halt due to a near-stalling of orders.

Total new orders fell for the first time in over a decade. The deterioration in was in part linked to the coronavirus outbreak, manifesting itself in weakened demand across sectors such as travel and tourism, as well as via falling exports and supply chain disruptions. However, companies also reported increased caution in respect to spending due to worries about a wider economic slowdown and uncertainty ahead of the presidential election later this year.

However, he added that optimism has risen, suggesting investors see the currently clouds as parting by the end of the

The survey data are consistent with GDP growth slowing from just above 2pc in January to a crawl of just 0.6pc in February. However, the February survey also saw a notable upturn in business sentiment about the year ahead, reflecting widespread optimism that the current slowdown will prove shortlived.

That activity gauge has dealt a blow to US stock markets, which have slid at the open.

It has also knocked Europe back down, disrupting its flat performance:

Here are the readings (where a score above 50 indicates growth):

Private sector firms across the US signalled a slight decline in business activity in February. The overall contraction was driven by a notable worsening of service sector performance, where output fell for the first time in four years.